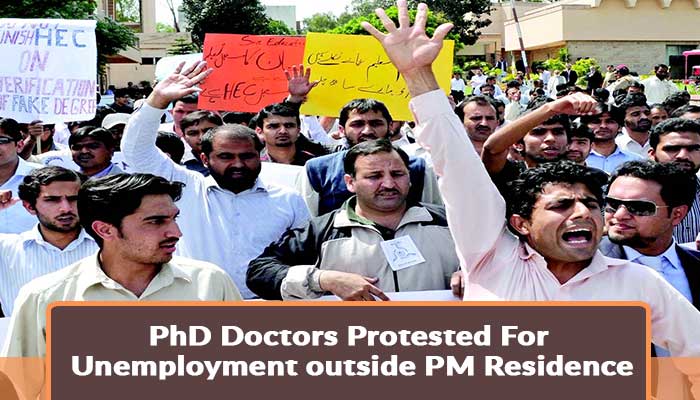 On call of protest by Young PhD Doctors Association (YPDA), a huge amount of PhD scholars came together to record their protest about unemployment. They were holding placards and banners and were chanting slogans against inadequate policies made by HEC and Federal government for providence of employment. The protestors stood outside the main gate of PM Imran Khan’s Bani Gala residence. Young PhD Doctors Association (YPDA) recently came into being and it has an aim to fight for the rights of talented scholars. The scholars were promised by HEC for job availability but did not fulfill it. A large of scholars from all over country, have been unemployed for years and there is no major step taken by HEC and Federal Governments for eradication of their problems. The protestors recorded their statement for the media, “We knocked each door, went everywhere including pledging to Supreme Court, the HEC as well as the federal education ministry but all in vain,”.  They were not ready to leave the place until their demands have met, or a promise of solution is offered by HEC and Federal government. They even tried to block PM Imran Khan’s way but later the security forces became successful in dispersing them.

According to HEC, Pakistan has 38,000 PhD scholars belonging to different fields. These scholars have done PhD from international and national universities. HEC has also announced the plan of adding more 38,000 PhD scholars till 2025. But unfortunately, the employment opportunity is still not provided to many of them. As per the claims made by HEC, the country produces 5,536 PhDs nationally. Looking at this huge number, the same number of employments opportunities should also be produced. HEC also provides scholarships to students to study in foreign countries. All the matters relating to immigration are also settled by HEC. The government is spending 1 million on Phd scholars for research work. Further, facilities and part time jobs for students are also HEC guided while living in abroad.

“Your all reasonable demands would be reviewed on priority basis,” said, PM’s Special Assistant Naeemul haq assured the protestors. He also tried to console the protestors and gave assurance to them that the action will be taken soon.

Here is the list of Government Funded Programmes Provided to foreign students in USA, UK, Austraila, France and Switzerland. These programmes work with countries around the world and provide scholarships to talented students to study in their country.