Why is immigration such a huge decision? Top 10 questions to ask yourself before you decide about migrating 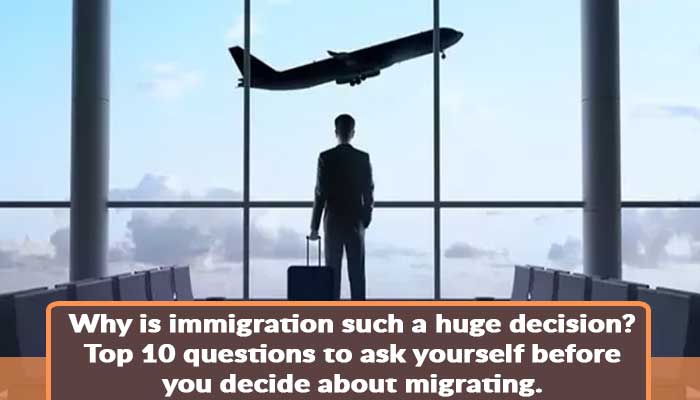 Migrating to a foreign and unknown country requires massive transition on personal level. It entails adjusting in an unfamiliar culture, learning a new language, following strict laws, adopting novelty and transformation of self. The perception of migration is generally associated with great expectations. The expectations to have a better living standard, upgraded job opportunities and availability of higher quality of health care. One of the perquisites of relocating in a new country is readiness to spend a major amount of one’s financial resources. In countries like Pakistan, people consider living abroad as upgrading of living standard. But the bitter fact which remains unknown until they reach at their desired destination is that upgrading will require effort and hard work even in foreign country. So before utilizing a major amount of your monetary resources for relocation and migration to a foreign country, you must ask yourself these 10 questions.

1- Are you ready to embrace a new culture?

Living with a new culture involves accepting the differences and letting go of rigid political and religious views. The clothes they wear, the food they eat and the thought process they have must be let un-judged and un-questioned.

2- Are you ready to leave Behind Familiarity and Comfort Zone of Your Country?

The comfort of living in your country cannot be compared with any other materialistic commodity. We are not only familiar to people and places, we are familiar to the laws and regulations, traditions, customs and language.

Language is related to perception. It is difficult to learn a new language and the expressions being used in a foreign language while communicating. A person cannot be completely able to convey his/hers thoughts if the language is not learnt. The person must be fully ready to undertake this difficult task of learning a new language if he wants to migrate.

4- The Phenomenon of Fear of Missing Out

The people who live abroad are not being able to be physically present at all festivals and celebrations of their native country. The family events often pass unattended by them. They end up experiencing the happiness of significant events of their families and friends only through looking at the pictures.

5- You will be called a Foreigner

6- It will take long time to fit in

Fitting in new atmosphere will not happen abruptly. It is a long process and requires effort on daily basis. It usually not as easy as it seems.

You must be ready to work hard to manage your living expenses and paying bills. The people who migrate to a foreign country find it hard to get better job opportunities as compared to the natives of the country.

9- Ignoring Conflicts and Fights with the Natives

Natives mostly have privilege of law rights and financial edge over the citizens who have migrated. The newly settled community often has to go through sacrifices. The natives are preferred and migrated people have to save themselves from trouble of indulging into conflicts with them.

The change in climate and weather is hard to adjust in for some people. You might initially end up catching infections and colds if your body is not used to adopt change of climate.