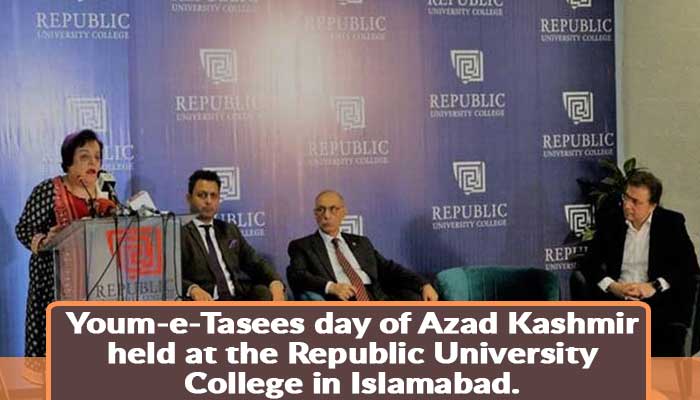 The event was attended by Federal Human Rights Minister Dr Shireen M Mazari who addressed a seminar and presented a potential strategic conflict resolution model for Kashmir. Youm-e- tasees or Azad Kashmir Day has been celebrated every year on 24 October since 1947.Dr. Mazari suggested that Pakistan should put forward resolution of Kashmir problem similar to Irish peace accord. The Irish peace accord known as The Good Friday Agreement (GFA) or Belfast Agreement was an agreement where the British and Irish governments agreed on referendum in Northern Ireland to get opinion of public whether they want to support the multi-party agreement or not.

Furthermore, Dr Shireen Mazari said Pakistan should request UN to perpend documenting all the eligible voters of Jammu Kashmir for the referendum. She strongly condemned the oppression inflicted by Indian Army to innocent Kashmiri women and youth. She recommended Pakistan to take practical approach on Kashmir instead of mere debates and theories.

The Seminar held in Republic University College Islamabad was also attended by defence analyst retired Lt Gen Amjad Shuaib and senior anchorpersons Dr Moeed Pirzada and Fahd Hussain. The Interior Ministry of Pakistan has also urged the nation to wear black band and observe a minute of silence on “Black day” to be celebrated to express unity with Kashmiris on October 27, 2018.

According to reports, 17 people were killed by shotgun pellets between July 2016 and August 2017, and 6,221 people were injured by the metal pellets between 2016 and March 2017. Civil society organizations believe that many of them have been partially or completely blinded.