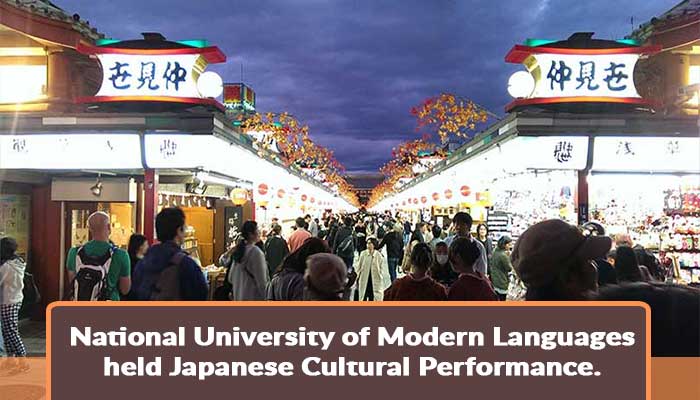 The event was organized by the Embassy of Japan at the auditorium of the Pakistan National Council of the Arts. Students of National University of Modern Languages and volunteers from Japanese Association Pakistan participated in the event. The purpose of the event was to strengthen friendship ties of Pakistan and Japan.

The participants entertained the attendants with traditional Japanese drum beating (Wadaiko), Japanese martial art demonstration, and singing of Japanese and Pakistani songs. Yusuke Shindo, Charge d’ Affaires, Embassy of Japan said , “I often feel that the whole country of Japan is like a huge incubator of Japanese culture because geographically Japan is an isolated island country and we have nurtured our own very unique culture through our long history. Our culture is colorful, beautiful and dynamic. It reflects the vitality and strength of the Japanese people.”

He further said, “We hope such Japanese cultural activities will contribute to mutual understanding and help strengthen friendship between Japan and Pakistan.”

Pakistan and Japan share good diplomatic relationship. Japan has been aiding Pakistan in fields of education, security, trade, IT and economics. Around 12708 Pakistani nationals were living in Japan as per calculations in 2015.

Japan is also popular study destination for students who want to study abroad . A large number of students are studying in Japanese Universities. Pakistan Students Association Japan (PSA-J) is an oldest organization of Pakistani students studying in Japan.

As per a survey in 2017, around 267,042 foreign students were studying in Japan. Japan is estimated to expend roughly 4 trillion yen ($35.6 billion) for education budget in 2018.Like China, Japan pays keen interest in inviting foreign students to study in Japanese universities. Students from Asian countries are higher in number as compared to western countries.

As per a survey done by Japan Student Services Organization (JASSO), the number of Asian students studying in Japan for higher studies were calculated as: Chinese students are 8,777, from Vietnam 7,864, from Nepal 2,029, from Republic of Korea 283, from Taiwan 617, from Sri Lanka 2,631, from Indonesia 865, from Myanmar 965, from Thailand 143 and from Malaysia were counted 211 from years 2016-2018. From western countries the number of Students from USA and Australia are high.

Here is the list of Japanese governments’ funded scholarship programmers for foreign students including Pakistani: