Why Pakistani students preferred to migrate in Europe countries for higher education. These 10 points will help you to understand. 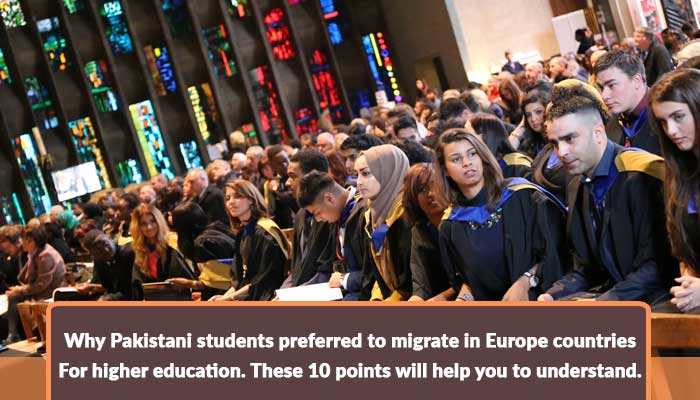 The Degrees awarded by European Countries are highly sought after by World’s top class recruiters and multinational companies. After attaining a degree from a European higher education institute you will get so many offers and your options for career will be wider.

Mostly European Countries are English speaking. If English is not native language in some European Countries but still it is a second language which is similar in Pakistan. While living in Europe, there will be no language barrier for you to communicate and progress while studying in also doing job.

You will find Pakistanis in all across Europe. You will almost feel like home and in addition, European people are least racist and judgmental. They are welcoming and congenial; adjusting there would not be a problem. There are already many foreign communities settled and living a peaceful life.

Unlike Japan, China and Thailand, where Pakistani people struggle to find food of their choice, in European countries Pakistani students will not have an issue of this sort. As there are already numerous Pakistani families settle, there Pakistani and Indian restaurants and you even might get a part time job in those restaurants.

If you want to know about multitude of cultures, you must live in Europe. European countries are being visited by people belonging to every nook and corner of the world. You will get to meet all the cultures while studying there and can learn a great deal about it without even having to travel the world. Europe is not only favorite study abroad destination of Pakistanis but also of every higher education student of the world.

Another reason of Europe being popular study abroad destination is definitely availability of scholarships, fee waivers and education free of cost. Sweden, Norway, Germany, Poland and Austria are European countries which are offering free education in its higher education institutes regardless of any nationality specification. European Universities are running multitude of scholarships programmes as well.

8. A Wide Range Of Courses:

The higher education field in Europe is most advanced and updated. You will find so many choices of courses and too with high career scope.

9. Adding Value To Your passport:

Getting a student’s visa from a European Country will add immense value=e to your passport which allow you to gain visa of any other country more easily. Moreover, having visa of one European country will make you travel other European countries under some specifications.

European countries are economically, politically and socially developed states. Getting a part job there of your choice with your preferred hours and with high payment is probably more easy than anywhere else in the world.