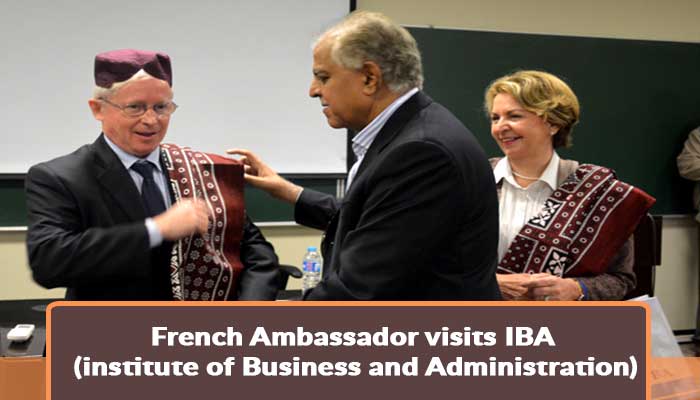 A session was held in IBA (Institute of Business admiration) main campus with French Ambassador Dr. Marc Baréty and his team. Dr .Barety said that France wants to maintain good diplomatic relations with Pakistan and want to play its major role in development of higher education in Pakistan. He also mentioned that Prime Minister Pakistan has been invited in Paris Peace Forum for dialogues on various agendas including education. The French embassy team was consisted of Higher Education Attaché Mr. Sebastien Cartier and Consul General Mr. Didier Talpain. From the IBA attendees included, Associate Dean Dr. Huma Baqai, Chairperson Social Sciences and Liberal Arts Dr. Faiza Mushtaq, heads of centres,faculty members and students. The topic under discussion in session was mainly to eradicate the gap and form better relationship between Pakistan and France. The importance to develop   collaborative relations between the French and Pakistani educational institutions was discussed further. Dr. Barety and the team elaborated the availability of various avenues of attaining higher education in France, and also government funded scholarships opportunities were discussed in detail. The session was appreciated by all the attendants including the faculty of IBA and French delegation. It undoubtedly sophisticated the good efforts of French government in building a strong relationship between the two countries.

Mr . Sebastien Cartier the Higher Education Minister educated the attendants about the current educational institutes in details. He said that France has 85 public universities, 220 business schools, 290 PhD schools and 1,200 research labs which are providing their educational facilities for students at a very low tuition fee. 42% of PhD students are foreign students, which clearly explain France’s policy to make higher education atainable for everyone. Furthermore, he also elaborated that the fee structure is very low and affordable and its main objective is to get education on higher level in reach of everyone.

The French minister for education discussed his country’s intentions and implemented steps in field of education and programmes involving foreign students. He said that French government has keen interest in admitting Pakistani students into their universities for higher studies. According to him , French language will not become hurdle in studying in France because there are plenty of courses being taught in English for foreign and local students in French Universities. For resolving monetary issues the French government has allowed its foreign students to work in their country for specific allowed hours according to the course they are studying and time of their stay in France.

Here is the list of 10 best universities of France offering courses in all fields which are mainly being taught in English for foreign students.

5-University of Technology of Compiègne;