Is USA Really the Right Choice to Live for Pakistanis in Trump’s Government? Let’s Look at the Pros and Cons 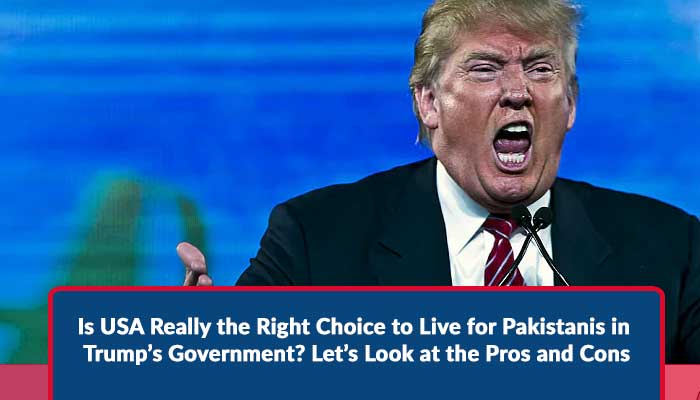 United States is considered super power of the world at present. It has the strongest economy and it is controlling most of the world with its power. America has always been famous for starting wars and going to the extremes in it. Despite all what this country is, it has always been the top immigration destination. USA is currently home to over 11.5 million immigrants which comprises about 30 percent of its total population.

Even today, people from all around the world hold the American Dream. They wish to settle in United States. Every year thousands of foreigners move here for study, job, business or to make a living. America is ranked one of the most racist countries yet that have no effect on these people.

If we talk about few years back, moving to America and making a living was not very difficult. If you are super rich then you won’t have problem going anywhere but very few people are rich enough. It was simpler even for unemployed who would migrate here to find work. But with the passage of time, laws and regulations got more strict and Americans also started to get sick of seeing so many foreigners. Racism is illegal whoever tried to harass any foreigner or immigrants was strictly dealt with.

All short minded illiterate fools were forcibly bounded by the law which is a good thing. It shows how stable a nation is. However, in past few years these bigots reinvigorated greatly particularly against Muslims and this time lawmakers also decided to stay out too. The excuse was the incident of 9/11 which caused more harm to Muslims around the world then Americans.

A large portion of American population stands against Muslims and people from Muslim countries. Thousands of harassment incidents have been reported since then. Like it was not enough then came the Trump who appeared in presidential elections in 2016.

Donald John Trump, is a 70 years old billionaire, American businessman and politician who has now become President of United States of America after defeating Hilary Clinton in elections. He took over the office on January 20, 2017. He is very infamous for his most extremist and hate dialogues and acts against all minorities and specially Muslims in America.

Trump on Muslims and Pakistan:

He is the guy who even before elections openly spoke bad about Muslims. He said disrespecting dialogue’s, in addition to Muslims, for many other nations. He made many racist comments and, ironically, still won the elections. In the following video, you can see press conference where Trump announced Ban of Muslims.

Numerous scandals arose during his election campaigns for objectifying women sexually and multiple rape charges. Many women claimed to have been assaulted by Trump, dating as far back as the 1980s - all of which Trump has strongly denied. There was also a video leaked in which he abused a female. He has even verbally abused women on camera which you can see in the following video.

Over 3,500 cases have been filed against including, rape, fraud, Assault and many others. Now, for some reason, he really is against Muslims and Pakistan. He has said in his election campaigns that he would ban all immigrants from Pakistan, Kick out all Muslims, close all mosques labeling them as Extremist and Terrorist. Such is the president, the most powerful man of America, what do you expect from the country. Here are some tweets by Donald Trump manifesting his thoughts about Pakistan.

Get it straight: Pakistan is not our friend. When our tremendous Navy SEALS took out Osama bin Laden, they did… (cont) http://t.co/s6u5o8Co

Pakistani intelligence had full knowledge that Bin Laden was living in Abbottabad. They were sheltering him.

When will Pakistan apologize to us for providing safe sanctuary to Osama Bin Laden for 6 years?! Some "ally."

Pros of Migrating to USA

1.     You get access to many employment opportunities which, unlike Pakistan, respect the worker’s rights.

2.    You get to choose one of 50 states according to your market and climate needs.

3.    You earn in American dollar which never going down.

4.    All biggest and the best of companies are found in United States.

7.    Higher education system is best of the world.

8.    Get to improving skills and capabilities for the working development.

Cons of Migrating to USA

3.    They have the worst and yet most expensive health care system of the world.

4.    Racism is the biggest issue to live in United States.

5.    Most Americans hate Muslims and think low of people from such countries.

6.    You can kicked out anytime as there have many bans On and Off.

7.    They have made it very difficult for Muslims to get US visa. Now visa applicants can also be asked for their social media and email passwords.

If you wish to study in United States, I would say go on do it. USA has the best higher education system and it is only a matter of few years. However, if you are planning to make a living in there, I would suggest you to reconsider it. United States may be a great country but only exactly for Muslims. You will see the first difference the very moment you will land there which will be clarified by the airport security.

You can find hundreds of videos on YouTube where Muslims and other foreigners from developing countries and Asia are abused. Some Muslims who are already living there claim that it’s not very bad. It is so because they are now used to it. We certainly are not. No one in your country will harass you for being Muslim or tell you take your Hijab off. For a person with soft heart, it can be quite difficult to deal with. If you are willing to sacrifice and tolerate these occasional abuses, you are good to go to.